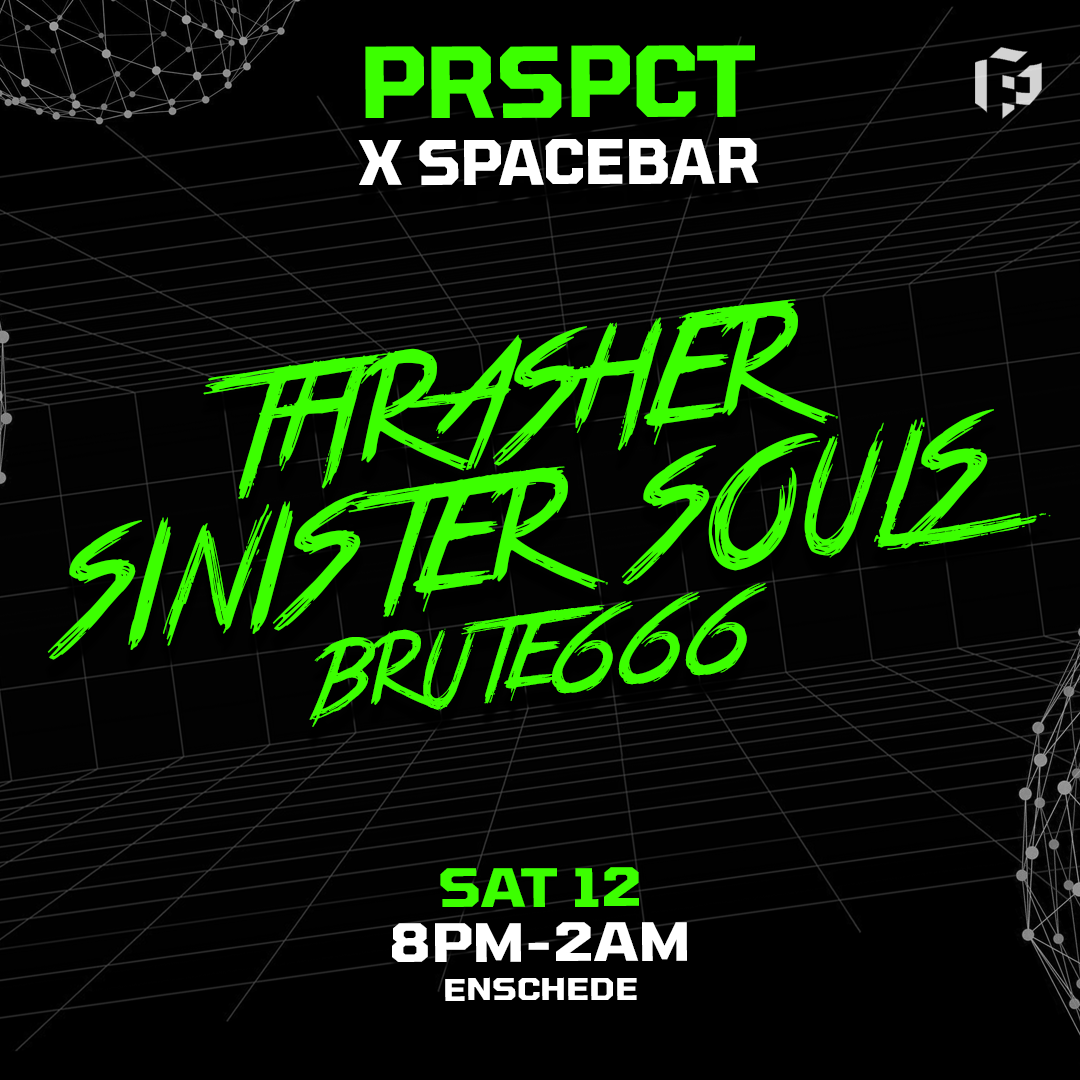 𝗪𝗘’𝗩𝗘 𝗚𝗢𝗧 𝗔 𝗗𝗔𝗥𝗞 𝗦𝗨𝗥𝗣𝗥𝗜𝗦𝗘 𝗙𝗢𝗥 𝗬𝗢𝗨
On Saturday 12th, we bring Sinister Souls & Thrasher from PRSPCT Rotterdam to Enschede and provide you with one of the hardest nights in SPACEBAR history!
Get your tickets here: https://planetart.stager.nl/web/tickets
𝗧𝗛𝗥𝗔𝗦𝗛𝗘𝗥
Raised on punk rock and guitar music, Thrasher has been f*cking the hardcore system since launching PRSPCT in 2002. A true embodiment of the PRSPCT label and event series that has gone on to conquer the world, Thrasher’s three or even four deck DJ performances cut between the hardest hitting drum & bass, out of the box hardcore, breakcore and more. He is also frontman of extreme supergroup The Dead Cvlt with Limewax and three iconic hardcore punk musicians. Thrasher’s musical tastes are much wider than his sets would have you believe. Tune into his weekly Wonderful World of Wax show on PRSPCT Radio for a peek at the PRSPCT chief’s vast and eclectic record collection.
𝗦𝗜𝗡𝗜𝗦𝗧𝗘𝗥 𝗦𝗢𝗨𝗟𝗦
Inspired by dubstep, drum & bass, rave, breakcore and industrial hardcore, Sinister Souls create their own vision of bass music. Since forming in 2009, the Dutch duo have released a series of albums and EPs on PRSPCT, performing at festivals like Q-Base, Defqon1, Decibel in the Netherlands and various gigs worldwide. Now the solo project of Fred Huurdeman, Sinister Souls has become a more purer hard drum & bass project aimed squarely at the dancefloor. Bringing special VIP tracks to every performance, a Sinister Souls show is like no other.
𝗕𝗥𝗨𝗧𝗘𝟲𝟲𝟲
Heavily inspired by hard experimental Drum and Bass & Breakcore with an underlying dark atmosphere, our crazy kicks & crazy snares loving SPACEBAR resident BRUTE666 will open and end the night; completing the whole.
Oh yes, we promise we’ll serve musical midnight snacks!
Online Ticket Sale stops on Sat. 12:00. Tickets at the door are LIMITED

The event is finished.

Scroll back to top